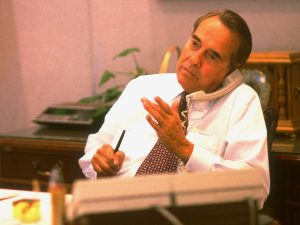 It is with a deep sense of loss that we at Powers law firm honor the passing of Senator Bob Dole. Several of us had the privilege of working directly with Senator Dole on legislation impacting people with disabilities, a traditionally marginalized group of Americans that he championed throughout his long career. In fact, Senator Dole’s first speech on the Senate floor in 1969 focused on the rights of people with disabilities, a group in which he considered himself a member.

Bobby Silverstein, a principal in the firm and former staff director and chief counsel to the Senate Subcommittee on Disability Policy, Committee on Health, Education, Labor, and Pensions, worked directly with Senator Dole on the passage of 20 disability-related pieces of legislation, including the landmark Americans with Disabilities Act (ADA), the 20th century emancipation proclamation for people with disabilities. Remembering his time working with Senator Dole, Bobby said:

“Senator Dole was the consummate policymaker, positioned to facilitate the enactment of legislation designed to advance equality of opportunity for people with disabilities. He lived with disability and had the integrity, courage to lead, commitment, and wit and sense of humor to overcome any opposition. I will never forget the day Senator Dole called a meeting in his conference room to facilitate the reaching of a consensus on the ADA. The principals and staff were at an impasse. He made it clear–through his words and actions—that he expected the group to walk out of his conference room with a deal! The group did not disappoint.”

John D. Kemp, a former Powers principal and honoree of the Dole leadership prize for his years of disability advocacy work, read a passage from the New Testament today at Senator Dole’s funeral at the National Cathedral. Kemp also shared his personal memories of Senator Dole in a recent statement.

“Bob Dole’s impact was far-reaching. His World War II injuries made him the most powerful American politician with a disability. As Senator, he worked to advance disability and human rights,” stated Kemp. “Throughout his life of incredible service and accomplishment, he remained humble, fun and brilliant. And, he remained deeply devoted to seeing the United Nation’s Convention on the Rights of Persons with Disabilities (CRPD) ratified by the U.S. Senate. As a close friend, I know seeing the U.S Senate ratify the CRPD was the most important accomplishment he wanted to achieve before he passed.”

Peter Thomas, the managing partner at Powers and member of the firm’s disability practice, said “I have great affection for Senator Dole and the way he routinely reached across the aisle to achieve meaningful advancements in policy benefitting people with disabilities. His bipartisan spirit, wit, and sense of humor made him a singularly effective leader throughout his lifetime.”

A link to Senator Dole’s memorial service can be found here.